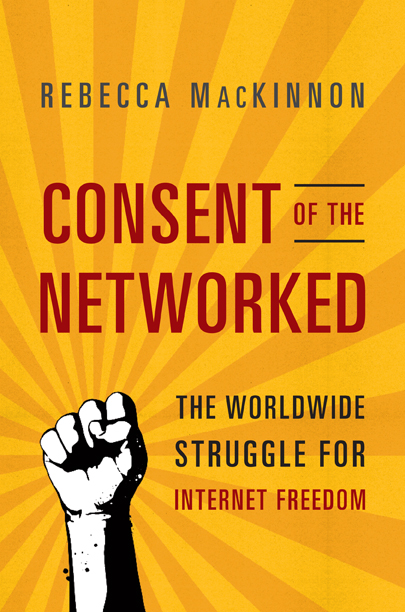 The internet has the capacity to provide low cost mechanisms to bring together information and people. This is the internet’s value, and a source of perceived danger to governments that fear the internet will be used as a tool by political dissidents to potentially overthrow current regimes. This issue, and the tension between governments, private companies, and global citizens’ internet access and privacy form the core of Rebecca MacKinnon’s book Consent of the Networked: The Worldwide Struggle for Internet Freedom. MacKinnon’s work presents valuable viewpoints to issues including intersections of privacy, access to online information, the formation of activist information communities, and the relevancy of these issues to the practices and work of information professionals.

MacKinnon spends much time presenting the internet as a catalyst for community formation and refers to tools such as WordPress as part of a global “sharing economy” and “digital commons” (MacKinnon, 2013, p. 16). She presents the idea of “netizenship” or citizenship for the internet. The internet allows for people who contribute to the digital commons to also act as its stewards, architects, and defenders (MacKinnon, 2013, p. 26). This presents a different power structure in terms of information sharing. As opposed to a central authority retaining arbitration over information, in a free internet the power rests within communities of people.

Perhaps one of the most relevant points MacKinnon makes is in regard to access and privacy and the need to look beyond our personal assumptions and acknowledge the sociocultural context within which people live and function. She recounts many individual experiences where lives and well-being were threatened by private tech companies colluding with foreign governments or sticking hard and fast to privacy rules that suit most Americans, but not all, and certainly not individuals living under very different circumstances.

A local example she provides is the experience of community creator “Harriet Jacobs,” who fled an abusive childhood and young adulthood, but then decided to share her experiences through her “Fugitivus” blog. Other survivors of abuse and allies used her blog as a gathering space and virtual support group. Jacobs hid her identity on her blog, but had multiple Gmail email accounts linked to both her online and real life names. When Google decided to release a social networking service called Buzz, it linked Gmail user accounts together in this new service without offering users the chance to opt out. As a consequence Jacobs and her network of abusive survivors became publicly linked and exposed to those that had harmed them in the past (MacKinnon, 2013, pp. 141-142).

Google executives had not considered how their new “convenient” Buzz service might negatively impact those it helped to convenience. Rather than provide a helpful service, it exposed users’ private information and networks without their consent. How do you define what is private information? What should internet users be able to access? Are definitions set by those with a privileged American perspective effective for all communities? These are all questions that librarians should consider in approaching diverse information seeking communities.

One of the difficulties of having American tech companies serve as judge and jury in access and privacy cases is that their employees view the world through their own experiences and do not necessarily possess the local knowledge necessary to most effectively deal with international or specific interest information communities. As Patricia Overall argues in “Cultural Competence: A Conceptual Framework for Library and Information Science Professionals,” there is a real need for an “ability to understand and respect cultural differences and to address issues of disparity among diverse populations” (Overall, 2009, p. 176). This is very evident in the cases that MacKinnon references, whether it is an American fleeing an abusive ex-husband, or a Chinese journalist seeking a free space to promote discussion and share information.

The ways we share and exchange information on the internet presents new challenges. There is an increasing dependence on “privately owned and operated digital intermediaries” and consequently an increasing need to question and remain aware of the policies and professional practices of companies like Apple, Google, and Yahoo (MacKinnon, 2013, p. 86). MacKinnon makes it clear that we need to remain aware of both private and public control of the internet and hold both private companies and government entities accountable for their decisions (MacKinnon, 2013, p. 130).

As librarians, we need to look beyond our own assumptions to what “access” and “privacy” mean, and to consider the broader implications of these terms to communities very different than the ones we find ourselves ensconced in. Although the communities we interact with in our own professional lives may not face the same challenges of the communities MacKinnon references, we still have a responsibility as netizens, as well as information professionals, to ensure that diverse community needs are met. It is important to stay aware of and engage with policy making by both governments and companies whose business transcends national borders and impacts the access to and privacy of information communities.