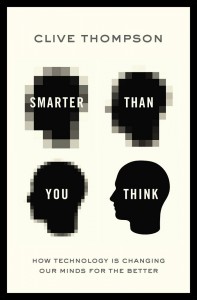 Although the title suggests that Clive Thompson’s Smarter Than You Think: How Technology is Changing Our Minds for the Better is a book about technology, while reading it I was struck by how Thompson focuses equally on the value of collaboration, highlighting the ways technology helps us to collaborate, increasing our collective intelligence and productivity as a result. Thompson explores a variety of technologies, from computer chess programs to lifeloggers – people who meticulously document all their interactions in order to create searchable personal memories – to videogames, to social media platforms such as Facebook and Twitter, in order to dispel the idea that reliance on computers is changing our brains for the worse.

There is a long history of cultural distrust of new technology. Thompson points out that while today cultural critics today worry that 140 character tweets will reduce our attention span or promote self-involved thinking, twenty-five hundred years ago Socrates worried that the advent of writing would spell the end of intelligent debate, mass market paperbacks were thought to dampen critical thinking skills in the nineteenth century, and the public adoption of the telephone led some critics to prophesize the degradation of citizens’ ability to converse face-to-face.

Contrary to these doomsayers’ predictions, each new wave of technology has instead increased our ability to share more information with greater populations and has focused our communication skills. Thompson argues that by providing a platform for users to share their writing, via blogs, message boards, and social media, the internet has increased the volume of writing citizens produce. He cites a study in New Zealand in which school children began publishing blogs of their assignments instead of privately turning them into the teacher as evidence that it increases the quality of our writing as well; students produced more polished writing for a global audience (blogging) than they had previously for an individual (the teacher). Two years after the program was implemented, test scores in reading and writing improved dramatically in the schools where students were blogging. This anecdote is especially apt given the use of blogging in INFO 200 – I have noticed personally that the threat of my classmates reading sub-par work is a greater motivation than the threat of just my professor reading it.

In addition to sharpening writing skills, the internet allows for connection of groups that previously would not have been able to communicate, or put in the terms of the coursework, the formation of information communities:

“For most of history, people couldn’t engage in mass collaboration. It was too expensive. To organize a widespread group around a task in the pre-Internet period, you needed a central office, staff devoted to coordinating efforts, expensive forms of long-distance communication (telegraphs, phone lines, trains), somebody to buy pencils and paper clips and to manage inventory… and so for centuries, people collaborated massively only on tasks that would make enough money to afford those costs.” (Thompson, p151)

Fisher and Durrance (2003) also note that the internet allows for information communities to form without geographic commonalities:

Thompson provides several examples of information communities enabled by the internet and their accomplishments: videogame players who create massive user manuals and documents about games such as Skyrim or World of Warcraft; Egyptian activists who used Twitter and Google Docs to connect donations of hospital supplies with the locations that needed them; and gamers who used a program called Fold.it to solve a protein folding problem that had been plaguing scientists for years.

The success of these different projects can be attributed to what Thompson calls “collective thinking”. For collective thinking to be successful, he explains, it requires a clear goal, both a small set of central or “core” users and micro-contributions from many less invested users, a culture of respect, and users who are connected, but not too connected. This last point may seem counterintuitive when discussing collaboration, but Thompson cites several studies showing that working on a project while in constant communication can actually stifle creativity. Brainstorming groups who work together and contribute ideas out-loud actually tend to come up with fewer ideas than groups that do their thinking individually and then come together to pool their answers.

In addition to organized information communities and mass collaboration on specific problems, Thompson also focuses on the informal ways that the internet and social media provide us with information. While taken individually, posts on social media sites such as Facebook, Twitter, and Instagram do not appear to provide much useful information, but when viewed as a whole they create a sense of ambient awareness about the lives of those who are posting. These bits and pieces of information add up to paint a picture of people’s lives, and allow us to absorb information about their thoughts, habits, and activities without going through traditional social practices of spending time together and having conversations. This ambient awareness strengthens our connections with weak ties – personal contacts whose lives do not overlap our own in very many spheres, and thus know people we do not know and have access to information we don’t. Thompson reports that his wife harnessed the power of social media, ambient awareness, and weak ties when finding their home. She posted a status update on Facebook about the Wi-Fi in a subway station she was in while house hunting, a woman she hadn’t spoken to in many years read the post and said “What are you doing in that neighborhood?” Upon hearing the answer, the friend put her in touch with a friend who had a house to sell nearby. This is an example in which social media contributed to information encountering (Erdelez, 1991) – Thompson’s wife was posting about the Wi-Fi, not asking for house leads – but it is also a tool people can consult directly with their questions. As Thompson puts it:

“You may not know the answer to a question, and your friends may not – but if they repeat your question, odds are their friends will, because once you’ve moved out to the third ring on your social network you’re dealing with scores or even hundreds of people”. (Thompson, p230)

While reading this chapter, I was reminded of a recent incident from my own life. There are two stretches of fence along a road that I run on that are hung with multiple padlocks. The locks are not serving to secure anything, and I’ve wondered what their purpose is since I first noticed them several years ago. I’ve asked multiple friends who also run along this road, and although they have recognized my description of the fence, none of them have had an explanation for why they are there. I theorized that maybe it is a lock graveyard, a lock retirement home, or a type of cairn, but none of these terms led to fruitful results on a search engine.

A few weeks ago I took my phone with me on a run, snapped a picture, and posted it to Facebook with a message asking “Anyone know what’s going on here?” Within five minutes, a friend I know vaguely from a defunct message board and have never met in person responded with a link to the Wikipedia entry on Love Locks and a message that she sees them where she lives as well.

Although Thompson extensively covers the ways in which technology allows us access to more data and information than we’ve ever had before, he only briefly touches on information science as a way to make sense of that data. In a four page section on digital natives’ lack of search literacy, he references research showing that until they have been instructed in search skills and evaluation of sources, students blindly select the top google results for their query and are unable to distinguish ads from non-sponsored content. This echoes the results I have been finding in my research about health consumers’ internet search practices (Warner & Procaccino, 2004). While Thompson does credit librarians in playing a vital role in teaching information literacy, and by extension, critical thinking skills, this is an underdeveloped point.

The takeaways of this book from a library and information professional viewpoint are the following: embrace technology – it is not going to lead to the downfall of civilization; adopt collaborative processes; and remember, just because someone is technologically proficient, it does not necessarily mean that they are search proficient. Our skills are still needed in the digital age to teach people how to sift through the ever increasing flow of information.

Thompson, C. (2013). Smarter than you think: How technology is changing our minds for the better. New York: Penguin Group.