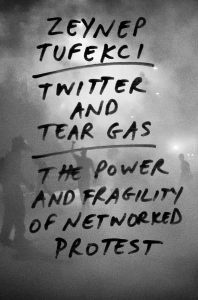 Author Zeynep Tufekci’s stated goal in Twitter and Teargas: The Power and Fragility of Networked Protest (2016) is “to provide empirically grounded, rich conceptual analyses of mechanisms that operate in the networked public sphere and that impact the trajectories and dynamics of networked social movements.” (p. xxix). This sets up expectations for a dry, abstract discussion, but the book is anything but that. Tufekci draws on her multilayered experience as activist, programmer, and LIS academic to tell the recent history of digital technologies and social protest. Her account is vividly illustrated by page-turning narratives, often drawn from her personal experience, of protests ranging from Tunisia, to Tehrir Square, from Gezi Park to Occupy. Her core topic, the way that social media and other digital technologies have changed activist tools and culture, as well as the responses from the powers that be, has immediacy and urgency. I turned from reading her analysis of the uses of disinformation on social media platforms to newspaper headlines about Facebook’s preparations for the upcoming U.S. election.

Tufnekci writes in her introduction, “my goal is not to judge success or failure, much less to provide recipes for either.” Yet one can’t help—or I couldn’t—treating the book as an updating of Rules for Radicals,  Saul Alinsky’s 1971 manual for community organizing. From the LIS perspective, Twitter and Tear Gas functions as a manual of information about activist networks and their information needs. It also raises implicit questions about what role LIS professionals might play in the need to distinguish the real from the fake in the growing information stream, and presents a wealth of concepts useful for discussing the flow of digital information in the context of LIS services.

Another important concept Tufnekci articulates is that of attention as a resource, whose opposite is lack of attention (of which censorship is only one form); and the changes in gatekeeping (who receives attention) brought by digital technologies. In chapter 6, “Platforms and Algorithms” Tufnekci examines Facebook, and how the platform’s design choices and algorithms are infused with almost invisible value judgements (Facebook’s choice of the thumbs up icon and its bias for positive stories). The issues raised by Facebook’s “real names” policy are essentially issues of cultural competency, as discussed by Montiel-Overall, Nuñez, & Reyes-Escudero (2015). In their chapter, Montiel-Overall et al. define cultural competence as recognizing the significance of culture (one’s own and others’), educating oneself about other cultures and using that education respectfully. On these counts, Facebook has failed miserably. As Tufnekci documents, the real names policy affects activists and members of the LGBT community in unexpected way, and is blind to linguistic differences (a Turkish name which is identical to a vulgar expression in English).

Facebook’s response has been to fix mistakes only when community pressure is exerted, without making change at an institutional level. The company seems to be operating at the cultural competency stage of color blindness, “everyone is the same to me” (Montiel-Overall et al., 2015, p.24). As Tufnekci points out, Facebook is, in effect, a privately-owned public sphere; and as her discussion makes clear, a de facto provider of information services. Yet the company prefers to view itself as a neutral platform for user content, perhaps as an excuse for its laissez-faire (and cost-saving) approach. This is an example of the difference between the passive institutional adherence to certain values (free speech) and the active ethic of caring that Montiel-Overall et al. (2015) discuss.

Tufnekci’s discussion of the ecology of activism is particularly rich and draws at least linguistically on the ecological model of ELIS Savolainen (2010) discusses, a model that considers behavior in the context of social and cultural factors. One of the cultural factors Tufnekci focuses on over and over again is the anti-authoritarianism and distrust of institutions in today’s activist cultures (at least on the left). While recognizing valid reasons for this attitude, Tufnekci’s anecdote of Occupy Atlanta’s failure to acknowledge its African-American members illustrates the invisible power structures of consensus, and its (cultural) bias towards the articulate and aggressive.

My reading experience was characterized by many, many moments of recognition. Past protest experiences came flooding back, including the often painful process of consensual decision-making, and how easily it can be derailed by one aggressive participant with an agenda. Tufnekci’s discussion of the way the flood of fake news can lead to a state of doubt, distrust, and inaction brought up an even more visceral memory from the early days of the U.S.’s 2003 invasion of Iraq. I was working then with other activists on a documentary challenging the invasion’s legitimacy. As an editor of a segment on the mainstream media, I watched hours of news footage with two other filmmakers and I remember vividly how we came to doubt the core belief motivating us, that there were no weapons of mass destruction concealed in Iraq and that the invasion was based on a lie.

I also brought to this reading my own technological biases: as a reluctant participant in the digital technology revolution, as a skeptic of the internet’s early utopian dreams (Tufekci describes the early idealism of “cyberspace” as a place free of the class, race, and gender biases found in the “real” world), and finally as an infrequent to non-user of social media. Reading the first two chapters of Tufekci’s book, where she outlines the ways Egyptian activists used social media to rally supporters and manage the logistics of a sustained resistance, I became reconciled to these platforms; after reading Chapter 6, which outlines the ways in which social media has created a public sphere which is privately owned and the problems that arise from these corporations algorithmic tweaking of peoples’ perception of reality, I returned to my original state of dislike and distrust. In the end, I settled somewhere between these two extremes, considering instead a quotation from historian Melvin Kranzberg that Tufnekci returns to more than once: “Technology is neither good nor bad; nor is it neutral.” (p. 122). As Tufnekci notes, the ways in which technology is not neutral continue to change even as their specifics are elucidated.