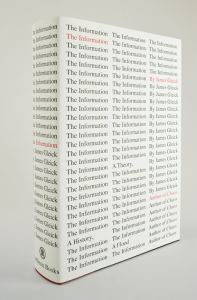 This book report was written by Laurel Brenner, Spring 2015.

For the 200 book review assignment, I read James Gleick’s 2012 book The Information: A History, a Theory, a Flood. And what a flood it was; more like a tidal wave.

In Module One of this class, Dr. Stephens mentioned some of the words commonly used to describe the wealth of information available to us, such as “flood,” and “explosion.” This was certainly in line with Gleick’s theme, as well as my feelings as I read the book.

I chose this book for the assignment partly because I remember skimming and enjoying one of Gleick’s previous books, Chaos: Making a New Science. What I didn’t remember from that experience (until I dove into The Information) was how dense and in depth his material is, almost to the point of minutiae overload.

The other reason I picked this book from the list of options is that I am interested in archeology and history, and I was excited to get a better understanding of how information itself “began” among humans and within societies. The Information definitely delivered on that front. The book is arranged in an historical timeline, starting with the origins of “information” from the earliest oral traditions to the development of writing and the alphabet, proceeding through the eras of mathematics as information, the telegraph, the early days of Bell Labs, the enigma machine, the discovery of the structure of DNA, up to the coining of the word “meme,” and the flood of information in which we now find ourselves adrift in the age of the internet.

I very much enjoyed reading about the beginnings of recorded information and the “modern age” of information and the internet, but I found it a hard slog through the chapters that dealt with “information for information’s sake,” starting with descriptions of Elie de Joncourt’s 1762 four book publication containing the first 19,999 triangular numbers (i.e. 1, 3 (1+2), 6 (1+2+3)). This is where the book started to lose me in “too much” information about things that felt very theoretical. There were nuggets of insight and historical “ah-ha” moments throughout, but I felt quite bogged down by details that seemed to lack a cohesive thread to tie one “information era” to the next.

I did appreciate the interludes dealing with the dawn of the telegraph and telephone ages and the documentation necessary for those technologies. “The telegraph caused the preservation of quantities of minutiae concerning everyday life,” Gleick noted. This very much appealed to the historian in me and my interest in what the documentation of everyday life can tell us about the people who came before us.

And I was highly amused at the notion that came up again and again through history with each “new” development (particularly of the technological variety) that every new thing is “bad.” Like the age old, “Kids today! When I was young…” which, I am sure will go on and on as long as humans are around.  Even more amusing to me—and related to the “kids today!” sentiment—were the shortened phrases and words invented for the telegraph in order to save time and money, such as “mhii” for “my health is improving and “shf” for “stocks have fallen.” Those crazy kids were texting long before they knew what it even was!

Overall, Gleick’s orientation felt a bit too “western” in perspective. His first chapter “Drums That Talk” and second chapter, “The Persistence of the Word” highlight western hubris related to cataloging and understanding communication and information transfer systems.  In Chapter Two, a footnote in the section on Marshall McLuhan’s critique of print versus spoken communication/oral traditions illustrates this bias:

However, soon after, it all felt very “western” focused. Also, for all of the attention paid by Gleick to so many of the players that contributed to the various information advances, I was disappointed that in the in-depth discussion of the discovery and documenting of the structure of DNA, Rosalind Franklin was not mentioned. Her data sets were used by Crick and Watson in building their model of DNA, but her contributions were glaringly left out of their publications, and were neither cited nor publicly acknowledged by Watson or Crick until many years later. This was a missed opportunity by Gleick to illustrate the manipulation of information through concealment for one’s own advantage.

Another area in the book that overlooked the contributions (or rather the notable lack of contributions) by women was Gleick’s section devoted to Wikipedia; nor was there mention of the systematic efforts to eliminate or mis-categorize entries focused on women. Ironically, Gleick himself penned an article in 2013 for The New York Review of Books entitled “Wikipedia’s Women Problem,” so it was a shame that nowhere in this book did he even touch on the issue. I think it is critical to acknowledge this gender gap problem when writing about information and its modern forms. The conveyance of information is inherently biased by its authors (as is everything written or otherwise conveyed), and Wikipedia is missing out on the authorial perspectives of approximately half of the world’s population.

In the last chapter and Epilogue of The Information, Gleick finally begins to pull all the strings together. He touches on the overload of information available to the multitudes today; his stance is that it’s a good problem to have. He does temper this view with a reminder that “information is not knowledge, and knowledge is not wisdom.” And he wisely notes “Who will search; who will filter?” I agree that knowledge is power, and those who control information control the world! Which, again, is why it is frustrating that he didn’t even note Wikipedia’s issues with skewed authorship demographics.

I really appreciated how Gleick circled back to the notions of what information “is” as he wrapped things up and one theme really stuck with me. Pierre-Simon Laplace, French astronomer and mathematician, philosophized that “since the laws of physics apply equally to the heavenly bodies and the tiniest particles, and since they operate with perfect reliability, then surely (said Laplace) the state of the universe at every instant follows inexorably from the past and must lead just as relentlessly to the future.”

This reminded me of one of our early class readings, Michael Buckland’s “Information as Thing” (1991) article, which touches on the very question of “what is information,” and which I thoroughly enjoyed. In it, he makes several statements and references regarding this core question:

This last quote reminded me of the thought experiment, “If a tree falls in a forest and no one is around to hear it, does it make a sound?” Buckland wraps up with, “We conclude that we are unable to say confidently of anything that it could not be information. This leads us to an unhelpful conclusion: If anything is, or might be, informative, then everything is, or might well be, information. In which case calling something “information” does little or nothing to define it. If everything is information, then being information is nothing special.”

I disagree that with Buckland’s assertion that “being information’ is nothing special. Through this article and Gleick’s book, I have become more and more in awe of the notion that everything is information, from which off-shoots that are worthy of academic study and late-night pondering flow. The moment you describe, document, or convey information, its purity is compromised; it is forever altered. It is in these documentations, descriptions, and conveyances that we must be aware of our biases, our flaws, and the imperfection of our abilities to capture the essence of information.

As Gleick notes, “The library will endure; it is the universe.”

So, clearly, I like to ponder the nature of information and humanity’s views of how we make sense of the world… maybe I should have gone into philosophy!

I do think it is important for library and information professionals to consider the nature of information, since institutional biases, well as their own implicit biases, impact the work they do. The audiences they interact with look to them as experts and translators of the overflow of information available; they must be able to see clearly through the haze of “too much information” in order to assist their charges with discerning “the truth.” And they must be aware of the falsehood of even being able to provide “the truth” (whose truth is it?).

It is valuable to have information brokers (or perhaps “ambassadors”) in our increasingly “Wikipedia-ed,” commercialized, and peer-to-peer world of information. Librarians and information professionals should be stewards of both the information itself and of their patrons, who shepherd information in as unbiased a way as possible, especially when so much that we incidentally encounter is purposely packaged to evoke a predetermined perspective or action.

Buckland, M. (1991). Information as thing. Journal of the American Society of Information Science 42(5). Retrieved from http://people.ischool.berkeley.edu/~buckland/thing.html